In 2012 Milton’s Bells was contacted to see if we would be interested in donating one of our vintage Milton Bells to be used in a Super Bowl TV commercial.  We were told that the commercial would be advertising the new 2012 Chevrolet Corvette and would be submitted, along with several others, to compete for air time during the 2012 Super Bowl.  Naturally we were very excited to participate and loaned one vintage bells for the spot. 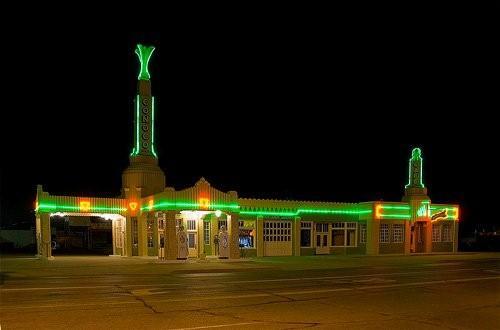 The commercial was shot in Shamrock, Texas and opened with panaroma of this classic art-deco gas staion on old Route 66.A vintage Corvette, that seemeds to be driven a ghost, pulls into the gas station at night.  As it slowly rolls to a stop it drives across the bell ringer tubing, rings the signal bell waking the gas station attendant.  “Ding-Ding”

A close up shot of the old gas pump shows the dials turn as the car mysteriously fills up.

Just as soon as the car has filled its tank it miracuously transforms into a brand new 2012 Corvette and speeds off.  The surprised gas station attendent to run outside just in time catch a glimpse of it all.  In the end the commercial did not air during the Super Bowl but we were very excited to be a part of it.  It brought to life a great old gas station and piece of Route 66 history and, of course, features one of our vintage Milton bells.  It can be viewed here on our site and on YouTube.

How can I view the status of my order?

How Soon will my items ship?

Most items will ship within one to two business days after purchase. All of the Complete wireless bell kits are pre-wired by hand in our shop so assemble may take an additional day or two to process. Generally, we will send you an email if there will be a delay.

How are the Shipping Cost Calculated?

You can view an estimate of shipping costs by viewing your cart. However, final shipping costs will be displayed on the Invoice you see before confirming your order. Costs are calculated automatically using algorithms provided by UPS and the USPS. They are not always 100% accurate, so if you are grossly overcharged we will refund the difference. Unless you are greatly undercharged we will usually cover the difference.

We are dedicated to your satisfaction and accept returns for 30 days after the original date of purchase. We charge a 15% restocking fee unless the item is defective. All items being returned must be in the original packaging and in original condition. To initiate a return you must contact us by email.  Contact us to email us the original transaction information so that we can process the return.

How are Warranty Claims Handled?

Do you ship internationally?

We ship to the United States and Canada.