Here is a fun article that features one of our products published in mental_floss by Kara Kovalchik.

Who knew that some noises could eventually become as extinct as the passenger pigeon? Depending on your age, you or your kids or grandchildren may have only heard some of the following sounds in old movies, if at all.

The formerly familiary swooosh as the caller rotated the dial clockwise to the “finger stop” and then the click-click-click as the dial returned counter-clockwise to the start position is now a novelty application that you can install on your iPhones for nostalgic yuks. Adolescents waiting in line nearby will wonder what the heck that sound is, while we older fogies will know you’re poking fun at us and our ancient ways.

Manual typewriters had an entire subset of unique sounds that made them immediately identifiable…at one time. The keys clacked loudly as they struck the paper, the carriage lifted up with a distinct clunk when the shift key was employed, and then there was the ping of the bell warning you that you were nearing the end of the line. That meant you had to lift your left hand from the keyboard and swipe at the carriage return lever, which caused a sort of ziiiiip noise as you pushed the carriage back to the starting position.

If steampunk had an aural definition, it would be the bloop-hissss of an old school coffee percolator.

The loud rapid-fire click-clack of an Instamatic camera equipped with a flash cube was a common background sound at any social gathering in the 1960s. It was a technological breakthrough to be able to snap off four – count ‘em, four! – photos in rapid succession without having to pause and install a new flash bulb after every shot. Even back then your crunchy granola types were concerned with the amount of waste used flash cubes created, so it became a common holiday craft project to repurpose the used cubes into trendy Christmas tree ornaments.

When announcers of yesteryear used to admonish viewers, “Don’t touch that dial!”, they were referring to the channel selector knobs found on TV sets. The standard TV dial went from 2 to 13, and you had to click on each number as you searched for one of the three channels that broadcast in your area. That meant a lot of clunk clunk-ing interspersed with the static-y sound of “snow” on the blank stations. Listen to this old Muntz after it’s first switched on and you’ll hear another antique sound, the soft buzzzz of the picture tube warming up.

Record changers allowed you to stack a selection of albums of 45s (seven-inch singles, not guns!) for your longer-term listening pleasure. Each record would make a soft slap sound as it dropped onto the turntable, a series of clicks followed as the remaining records adjusted into place and the tone arm swung over and lowered the needle into the outer grooves of the record. You’d hear the slightest scritch noise as the stylus settled just so into the vinyl and then (finally!) the music began.

Back in the days when all gas stations were full-service, the thin black pneumatic hose that snaked across the pavement was as familiar as the fuel pumps. When vehicles drove over the hose, a loud bell ding-dinged! inside the station, alerting the attendant that he had another customer. You can hear one at MiltonsBells.com and even order one for your home driveway if you really dislike your neighbors. 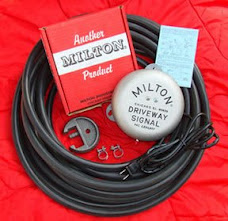 Before infomercials were invented, television stations actually went off the air for a few hours each night. Some of us TV-holics experienced physical withdrawal symptoms when we heard the announcer intone, “We now conclude our broadcast day…” around 2AM or so. The format varied little from station to station across the country; first a few technical details were announced (broadcast frequency, physical address of the station, etc.), then a reading of “High Flight” followed by the National Anthem, and then the steady beeeeeeeeeeeeeep tone of the test pattern.

Those chunka-chunka push buttons were clumsy, but (unlike the fellow in this video) veteran cashiers could check you out just as fast with these old-style machines as their modern counterparts do with today’s scanners.

One of the jobs of the classroom A/V squad captain was to run the film projector on movie days. The rapid tick-tick-tick of the sprockets really was that loud and usually accompanied by shouts of “Turn it up!” and, of course, “Focus!”

Remember when you’d beg mom over and over for something and she’d finally yell, “You sound like a broken record!”? She wasn’t referring to pops or hisses, but the repetitive effect that happened when the needle got stuck and played the same few notes over and over and over again… like at the 1:00 mark of this clip:

If you’re not afraid of revealing your true age, let us know how many of these you remember from your past!

How can I view the status of my order?

How Soon will my items ship?

Most items will ship within one to two business days after purchase. All of the Complete wireless bell kits are pre-wired by hand in our shop so assemble may take an additional day or two to process. Generally, we will send you an email if there will be a delay.

How are the Shipping Cost Calculated?

You can view an estimate of shipping costs by viewing your cart. However, final shipping costs will be displayed on the Invoice you see before confirming your order. Costs are calculated automatically using algorithms provided by UPS and the USPS. They are not always 100% accurate, so if you are grossly overcharged we will refund the difference. Unless you are greatly undercharged we will usually cover the difference.

We are dedicated to your satisfaction and accept returns for 30 days after the original date of purchase. We charge a 15% restocking fee unless the item is defective. All items being returned must be in the original packaging and in original condition. To initiate a return you must contact us by email.  Contact us to email us the original transaction information so that we can process the return.

How are Warranty Claims Handled?

Do you ship internationally?

We ship to the United States and Canada.